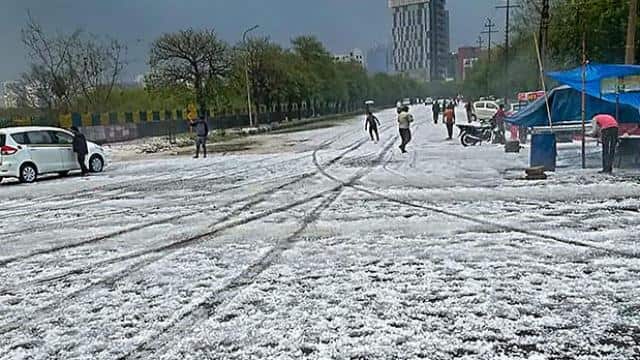 Warning of hail fall in Uttarakhand

Weather will be bad in Uttarakhand for the next four days. In the mountainous areas where the process of rain and snowfall will continue. For the next two days, the snowfall may slip down to 2200 meters. At the same time, hailstorm warnings have also been issued in five districts for January 8.

According to the forecast issued from the Meteorological Center in Dehradun on Tuesday evening, light to moderate rain will occur in most parts of Uttarakhand on January 5 and 6. Snowfall can occur in areas up to 2200 meters high. Hill stations like Mussoorie, Dhanaulti, Surkanda, New Tehri, Oli, Mukteshwar etc. will come under this radius. On 5th and 6th, cold days will prevail at some places in the state. There will be some relief on January 7. Along with Garhwal division, there is a possibility of rain and snow in the hilly areas of Bageshwar and Pithoragarh in Kumaon. The weather will remain dry over the rest of the state.

According to the Director of Meteorological Center Bikram Singh, there is a possibility of light rain at most places in the entire state again on January 8. On this day, there is a possibility of heavy snowfall at isolated places in Uttarkashi, Chamoli, Rudraprayag, hilly areas of Dehradun, Tehri, Pithoragarh and Bageshwar. Apart from this, there is a possibility of hailstorm and lightning in some places in Haridwar, Dehradun, Pauri, Nainital and Udham Singh Nagar. The Meteorological Department has issued a yellow alert for January 5, 6 and 8. There is a risk of damage due to hailstorm. The Meteorological Department has advised the administration to make adequate arrangements in areas prone to snowfall. At the same time, an advisory has been issued to make adequate management of rescue in case of increasing cold in the state.