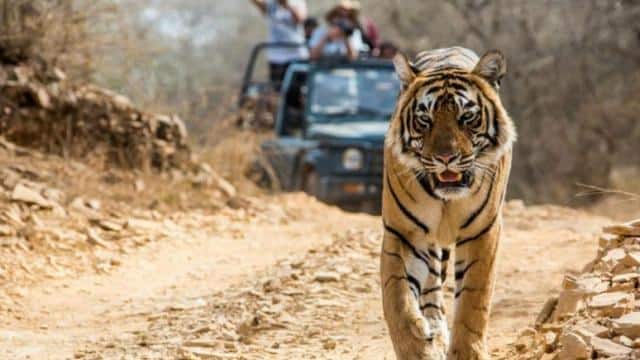 The tiger went missing from Jim Corbett Park since 52 days

The dreaded tiger, who killed a bike-riding youth in Mohan, adjacent to Jim Corbett Park, has kept the forest department and the park administration from sweating. For 52 days, 40 workers are looking for the tiger but the tiger has not been caught yet. Surveillance is also being done with 25 CCTV cameras.

Elephant patrol and drone search operations have also not been successful. The special thing is that even these days two dreaded tigers have been seen by the villagers around the population, due to which there is panic in them. On the evening of July 14, at six o’clock, two youths of UP were coming from Almora to Ramnagar on a bike.

A tiger attacked the bike near Mohan on the border of Corbett and Ramnagar forest division. The tiger dragged the young man sitting behind on the bike and took him to the forest and killed him. The movement of another dreaded tiger was seen on the same day. On this, the forest department decided to capture both the tigers. On Monday, 52 days of this campaign have been completed, but till now the tigers have not been caught.

The park’s wildlife warden Dinesh Singh Mangla told that the park staff are keeping an eye on the tiger with night vision drones.
Longest Search Expedition: This is being said to be the longest operation ever to catch a tiger in Corbett. Earlier it took 49 days to kill a man-eating tiger at places like Savalde, Chorpani, etc.

Attack on bike riders
Before the July incident, a tiger attacked and killed a bike rider in the Sarpaduli range. A few days later, a bike rider Beat Watcher was also attacked. However, the tiger fled after seeing the tourists riding on the gypsy.

A team of three doctors is also working along with the staff to catch the tigers. Tigers will be tranquilized soon.