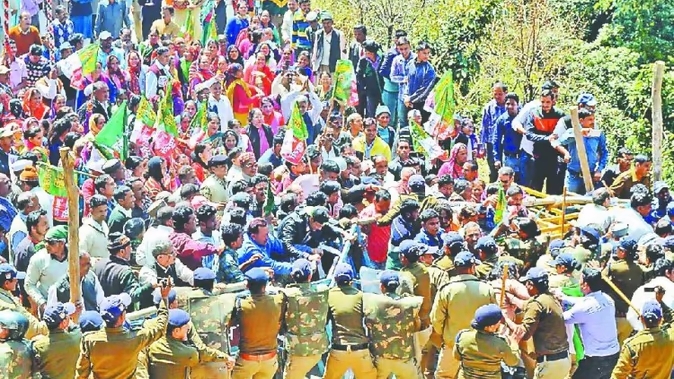 ‘Mahasangram’ broke out outside the house on Gairsain

On the very first day of the budget session in Gairsain, a great struggle broke out outside the House.

The police could not control the agitators who came on the road demanding to make Gairsain the capital. Breaking five police barriers, more than 200 agitators reached the assembly through the forest. There was a heated argument between the police and the agitators. During this, some police personnel lost their cool. They came down on abusive language with punches on the agitators. The agitators have accused the government of violating civil rights. About five hundred agitators were arrested by the police from different places, but there was a ruckus on the main barrier in Diwalikhal till late evening. Many agitators continued to climb the tower.

On Tuesday, the police and administration did not work in front of the agitators for the demand for permanent capital. The agitators going from Srinagar and Rudraprayag were stopped by the police at the barrier of Junglechatti and Diwalikhal in the morning, but as soon as in the afternoon, UKD activists and Sangharsh Samiti agitators from Gairsain under the leadership of Ukrand President Diwakar Bhatt, former president Pushpesh Tripathi arrived. So the police administration knelt down.

The agitators also demolished the elaborate arrangements for Diwali Khal by breaking two barriers built in Kalimati. After this, many women agitators and UKD activists including Praveen Singh, Darshan Mathpal, Gairsain chief Sumati Bisht, Saroj Shah, Kamala Panwar and many others reached the Vidhan Bhavan by walking through the forest. The police arrested the agitators and sent them to Malsi jail. Among those who demonstrated were many people including Sangharsh Samiti’s central president Charu Tiwari, Mohit Dimri, Deepak Benzwal, Dhaniram, Surendra Singh Bisht.

The Congress also demonstrated for the demand for permanent capital. In the demonstration that started from Gairsain under the leadership of AICC member and former Deputy Speaker of the Legislative Assembly Dr. Anusuya Prasad Maikhuri, Congressmen said that the previous government had done infrastructure development works here. Constructed many houses including Vidhan Bhavan, but the BJP government has stopped the work of Gairsain Rajdhani. Many activists including Puran Singh Negi, Pushkar Singh, and Rajendra Singh Sagoi were among those who demonstrated.