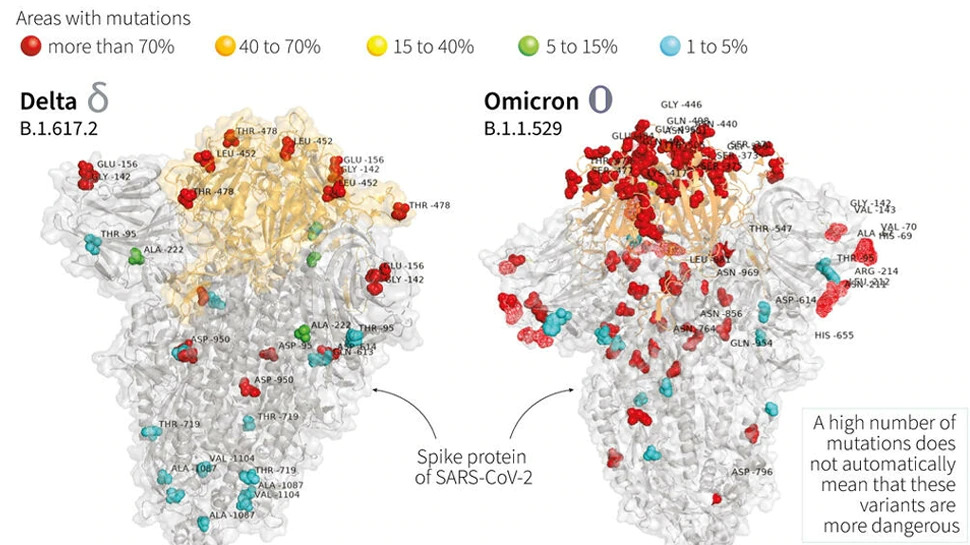 Omicron’s picture looks like a map. Omicron’s 3D image has been released. In which it is clearly visible that Omicron has more mutations than Delta.
The prestigious Bambino Gesu Hospital in Rome, Italy has released the first picture of Omicron, a new variant of Coronavirus found in South Africa. It is clear from this that Omicron has more mutations than the delta variant. A 3D image (3D Image) of Omicron has been released which looks towards a map. According to scientists, the upper part of Omicron contains proteins that interact with human cells. This does not mean at all that the Omicron is more dangerous than the delta variant as it is more mutated than the older variant.

Scientists said that when more research is done on the new variant of the corona virus, Omicron, then it will be known whether this variant is neutral, less dangerous or more dangerous than the previous variant.

Professor Claudia Alteri of the Department of Clinical Microbiology of Milan State University said that the research team is focusing on the 3D structure of the new variant of the corona to find out about the mutation of Omicron. This image of Omicron has been prepared on the basis of information given by scientists from South Africa, Botswana and Hong Kong.

What did Omicron’s image reveal?

He further said that the image of the new variant of Kovid Omicron looks like a map which shows its mutation but does not tell about the role of its mutation.

Professor Claudia Alteri said that many experiments are yet to be done on Omicron, which will show how the new variant of the corona is more mutated than the old variant on its transmission and what effect does it have on vaccinated people?