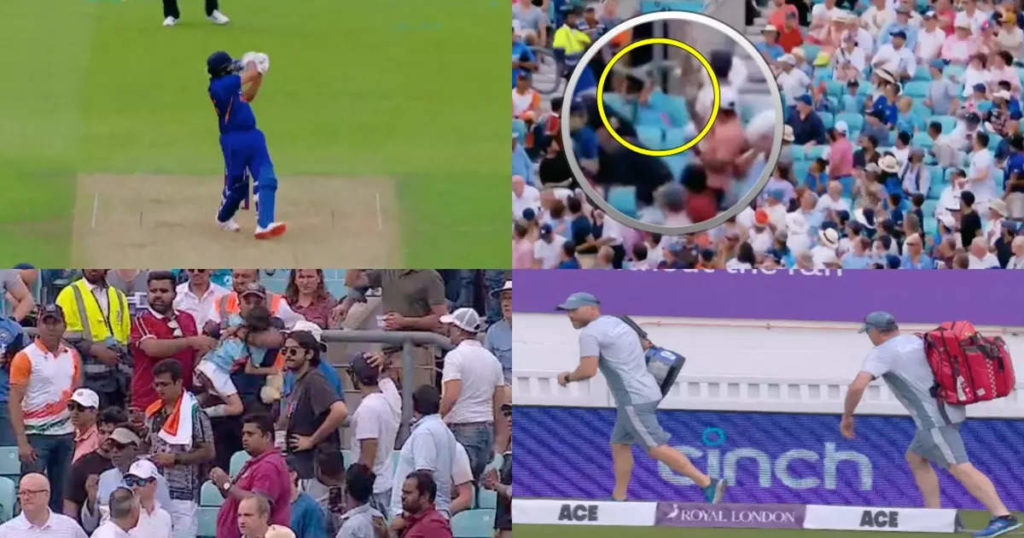 The first match of the three-match ODI series between India and England was played at The Oval on Tuesday. During the Indian innings, a small girl was injured by a shot by Team India captain Rohit Sharma. Later, Rohit expressed concern over the injury and inquired about the condition of the girl child. At the same time, the match was halted for 5 minutes. After the injury, England immediately sent its medical team to the girl.

Actually, Rohit Sharma was on strike in the 5th over of the Indian innings. David Willey was bowling for England. No runs were scored on the first and second balls of the over. At the same time, the third ball was shot pitch. Which Rohit pulls towards the square leg boundary. The ball hit the little girl sitting on the stand. Thankfully the girl did not suffer any serious injuries. girl

At the same time, Rohit looked sad due to the injury to the girl. The England team, showing humanity, immediately sent a medical team to see the girl in the stands. After the news of the child’s recovery, the game started again.

In the match, Rohit Sharma scored the highest unbeaten 76 runs in 58 balls. He hit 7 fours and 5 sixes in his innings. His strike rate was 131. This is Hitman’s 45th half-century in his ODI career. Chasing the target of 111 runs, Team India did not lose a single wicket.

Rohit has broken the spectator’s nose
with a six During the pink-ball test played between India and Sri Lanka in Bangalore this year, a spectator’s nose was broken by Rohit Sharma’s six. The ball was hit on the face of 22-year-old spectator Gaurav Vikas. After being hit on the nose, Gaurav was first given first aid by the medical team present in the stadium and after that, he was taken to the nearest hospital.

The injury was not very deep so surgery was not needed. Gaurav was sent home from the hospital after being stitched up.

England made the lowest score against India in the
first ODI, batting first, England could only score 110 runs for the loss of all wickets in 25.2 overs. This is England’s lowest score against India so far. At the same time, fast bowlers took all 10 wickets from India. This happened only for the second time for Team India in ODI cricket when all the 10 wickets were got by the fast bowlers. Earlier this happened in Mirpur ODI against Bangladesh in 2014. Then Stuart Binny took 6 and Mohit Sharma took 4 wickets.

Bumrah’s best performance of India against England in the
match Fast bowler Jasprit Bumrah also became the best Indian bowler to bowl in an ODI against England. He broke Ashish Nehra’s 19-year-old record. In the 2003 World Cup, Nehra took 6/23 against England. While Bumrah took 6 wickets for 19 runs.