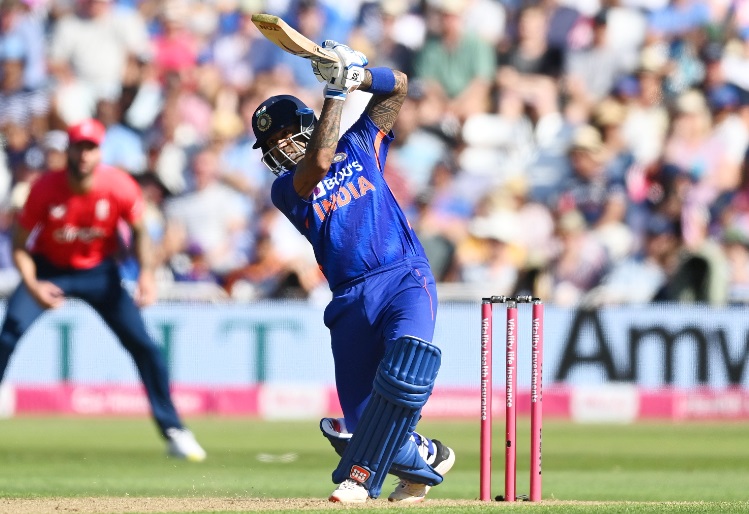 Despite Suryakumar Yadav’s stormy century, Team India could not clean sweep England in the 3 T20 match series. England beat India by 17 runs in the third match played in Nottingham on Sunday. Batting first after winning the toss, England scored 215 runs for the loss of 7 wickets in 20 overs.

In reply, the Indian team could only score 198 runs for the loss of 9 wickets in 20 sides. Suryakumar scored 117 runs in 55 balls. It included 14 fours and 6 sixes. Barring Shreyas Iyer (28), none of the other batsmen could support Suryakumar. India had won the first two matches. In this way, the series was 2-1 in the name of Team India.

India’s top order failed miserably in the last match. Rishabh Pant (1), Virat Kohli (11) and captain Rohit Sharma (11) returned cheaply to the pavilion. After this Suryakumar single-handedly kept India in the match. He was dismissed on the fifth ball of the 19th over.

David Malan scored the most runs for England. He played an innings of 77 runs in 39 balls. At the same time, Liam Livingston’s bat also spoke fiercely. He scored 42 runs in just 29 balls. Ravi Bishnoi and Harshal Patel got 2-2 wickets for Team India.

In the match, the Indian team made four changes in the playing XI. Ravi Bishnoi, Umran Malik, Shreyas Iyer and Avesh Khan had returned to the team. At the same time, Hardik Pandya, Bhuvneshwar Kumar, Jasprit Bumrah and Yuzvendra Chahal were rested.

Umran sent Jason Roy to the pavilion
Umran Malik, playing for the first time in the series against England, dismissed Jason Roy. Roy proved to be a complete flop in this series. Even in the last match, he could not do anything special. Roy wanted to send the ball going outside Umran’s off-stump, but the ball took the edge of the bat and Rishabh Pant took a simple catch. Roy was dismissed for 27 runs in 26 balls.

Butler’s Flop Show
: England captain Jos Buttler once again flopped in the third T20. He was bowled by Avesh Khan. In the match, Butler’s bat scored 18 runs in 9 balls. It seemed that today Butler’s bat would speak, but he could not understand the ball of Avesh and lost his wicket.