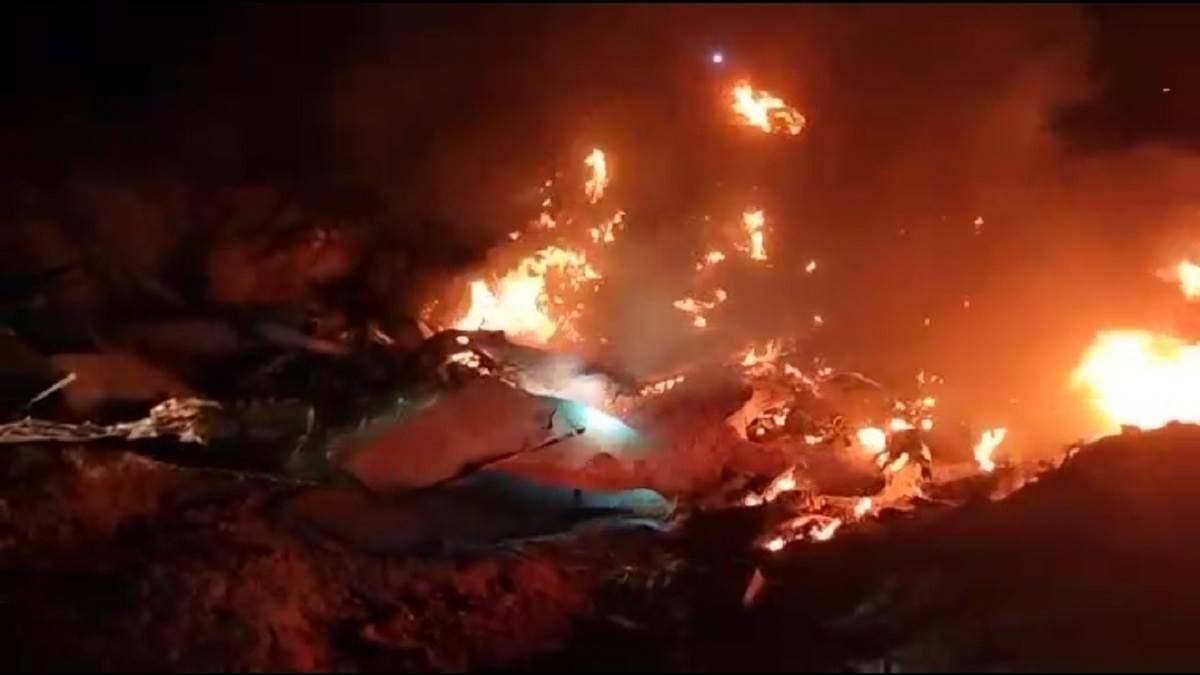 MiG Crash in Rajasthan Barmer A MiG aircraft crashed in Barmer, Rajasthan late on Thursday night. It is said that two pilots were on board the plane. The wreckage of the plane was scattered far and wide.

Jodhpur, Dialogue sources/agencies. MiG Crash in Rajasthan Barmer: Two pilots of the Indian Air Force were sacrificed on Thursday night when their two-seater MiG-21 fighter plane crashed during a training flight near Barmer in Rajasthan. The plane crashed in Bhimda village of Baitu police station area of ​​Barmer. When the plane crashed, there was a big crater in Bhimda village of the district where its debris fell. The Air Force has ordered a Court of Inquiry to ascertain the cause of the accident.

Defense Minister inquired about the accident from the Air Force Chief

According to the report of news agency ANI, Defense Minister Rajnath Singh has spoken to the Chief of the Air Staff (Indian Air Force) Air Chief Marshal VR Chaudhary about this accident. The Air Chief has shared the complete details of the accident to the Defense Minister.

According to news agency Pretr, Defense Minister Rajnath Singh expressed grief over the sacrifice of both the pilots in a tweet. Singh said that the loss of two air warriors in the accident is deeply saddened. His service to the country will never be forgotten. My thoughts are with the bereaved families in this hour of grief.

The Indian Air Force said that the aircraft had left for training from Rajasthan’s Utrlai airport on Thursday evening. It crashed near Barmer at around 9.10 pm. In this, both the pilots attained Veergati. The army has expressed regret over this. However, he did not reveal the names of the two pilots. The Army has said that it stands firmly with the bereaved families of the pilots. Along with this, an inquiry has been ordered to find out the cause of the accident.

One kilometer of debris scattered

According to the information, as soon as the plane crashed, it caught fire. With this, his debris was scattered about a kilometer away. The body of one pilot was badly burnt and the rags of the other were blown away. Many videos and photos of the accident went viral on the internet media. On the other hand, after getting the information, the local administration also reached the accident site.

The fire had started in the plane itself.

Eyewitnesses said that the plane had caught fire above, so the pilot made 2 to 3 rounds over Bhimda village to land it. Eventually, the plane crashed a short distance away from the village. There was panic in the village after the news of the plane crashed. The villagers rushed towards the spot but both the pilots were martyred. The incident is said to have happened around 9 pm. Incidents of crashes of MiG-21 aircraft have been coming to the fore in the past as well. On December 21 last year, a MiG-21 fighter plane of the Indian Air Force crashed near Jaisalmer in Rajasthan.