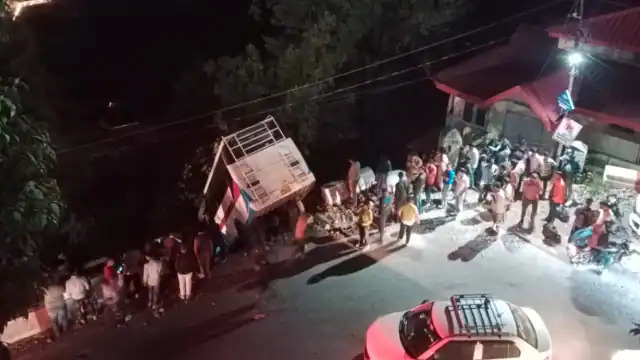 The accident happened in Uttarakhand late on Thursday night. On getting the news of the accident, people rushed to the spot. The accident was so terrible that the eyes of the onlookers trembled. Actually bus number UK 120B 0093 on Mussoorie-Dehradun route was returning from Mussoorie to Dehradun. As soon as the bus reached near the UPCL building, suddenly the brakes of the bus failed. Due to the failure of the brakes of the bus, the bus went out of control and collided with a car parked nearby and then hanged from the parfait.

After the accident, the students of Muzaffarnagar who were traveling in the bus started screaming. The driver was in the car who is safe. There were 31 students of SD Engineering College Muzaffarnagar in the same bus, who are completely safe, the driver in the same car is also safe, the police reached the spot and inquired about the incident. Giving information about this, Inspector-in-Charge Girish Chand Sharma said that the bus was returning from mussoorie

Due to sudden brake failure of the bus near UPCL building, 31 students were on board the bus and 33 staff were on board after colliding with a car. No one was harmed in the incident.