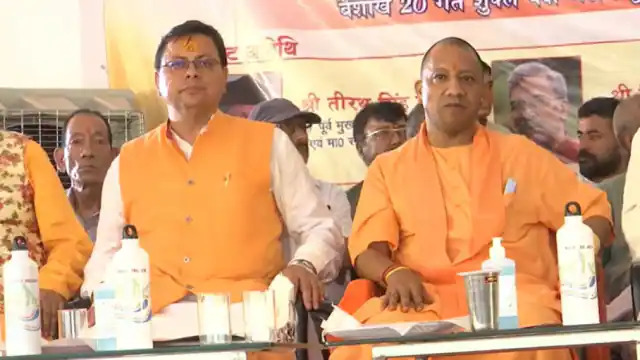 UP CM Yogi Adityanath is in Uttarakhand on a three-day visit. He is staying in his native village Panchur. The leaders of Uttarakhand are also convinced of the bulldozer model implemented in UP. VVIP treatment given.

In the program organized on Tuesday at Bithyani College, the leaders of Uttarakhand praised Yogi’s work as Chief Minister. CM Pushkar Singh Dhami said that when he went to Ayodhya in 1999, at that time Ram Lalla was in the tent, but now a grand temple is being built there.

Similarly, the Kashi Vishwanath temple complex has also been rejuvenated, which is a matter of pride for all of us. Former CM Tirath Singh Rawat said that if Yogi ran a bulldozer on the mafia in UP, other states are also copying it. Giving credit to Yogi for ending the mafia rule in UP, he said that now mothers and sisters feel safe there.

Former CM Trivendra Rawat said that Mahant Avadyanath laid the foundation of Ram Janmabhoomi movement, today his disciple Yogi Adityanath is getting an opportunity to build a temple in Ayodhya. Describing him as the most popular Chief Minister in the country, Education Minister Dhan Singh Rawat said that bulldozers are going on a lot in UP.

He was welcomed here by CM Pushkar Singh Dhami, former CM Trivendra Singh Rawat, Urban Development Minister Premchand Agarwal and Minister Saurabh Bahuguna. After this, CM Yogi held talks with BJP leaders in the state guest house built in the airport. After 20 minutes they again left for Yamkeshwar in their special plane.