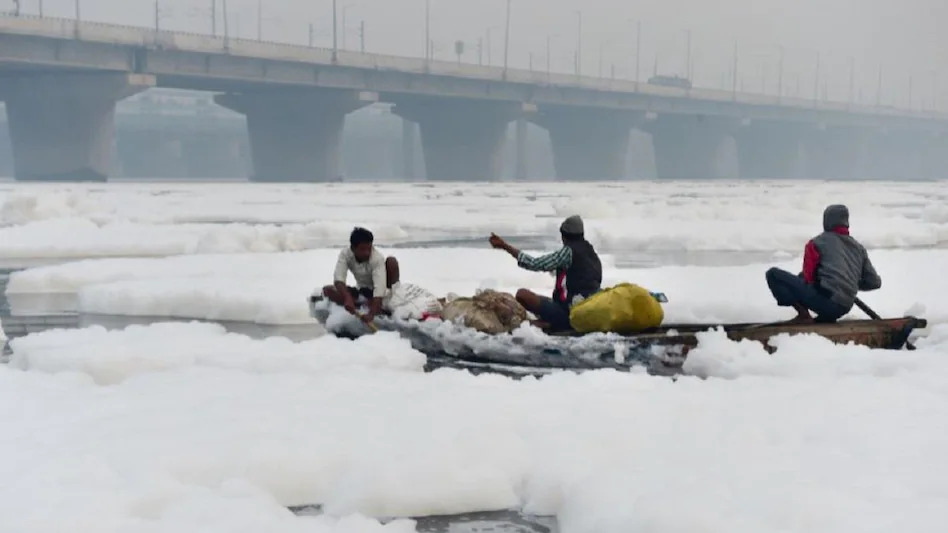 The Delhi Jal Board says that the paper and sugar industries operating in Meerut, Muzaffarnagar, Shamli and Saharanpur in Uttar Pradesh also release surfactant-rich water into the Yamuna river near Kalindi Kunj through the Hindon canal at the Okhla barrage. Due to this, foam starts to form and gets deposited in Yamuna. After the pictures of toxic chemicals and foam on Yamuna’s waves surfaced on the occasion of Chhath, questions have been raised on the Delhi government regarding the claims of cleaning the Yamuna. When questions arose, the Delhi Jal Board has held the Uttar Pradesh and Haryana governments responsible for the Yamuna case pollution. At the same time, BJP has raised questions on the Delhi government and the Aam Aadmi Party regarding the pictures of toxic chemicals in Yamuna.

Delhi Jal Board vice-chairman Raghav Chadha says that the governments of UP and Haryana do not care that they are releasing dirty water into the Yamuna. At the same time, the Delhi Jal Board is continuously working on increasing the capacity of its STP, so that untreated waste water is not released into the Yamuna. According to Raghav Chadha, Okhla Barrage comes under the Irrigation Department of the Government of Uttar Pradesh. Due to his relaxed attitude, hyacinth plants grow all around. It needs to be understood that when these hyacinth plants rot, they release surfactants like phosphates.

How are foams formed in the Yamuna river?

According to the Delhi Jal Board, when water containing surfactant like phosphate falls from a height in Kalindi Kunj, it produces foam. The foam released in large quantities floats on the surface of the water. It is very difficult to remove this foam.

The Delhi Jal Board says that the paper and sugar industries operating in Meerut, Muzaffarnagar, Shamli and Saharanpur in Uttar Pradesh also release surfactant-rich water into the Yamuna river near Kalindi Kunj through the Hindon canal at the Okhla barrage. Due to this, foam starts to form and gets deposited in Yamuna.

Even before this, many times the Delhi Jal Board was held responsible for the rising level of ammonia in the Yamuna on behalf of the Delhi government, but now when the poisonous foam appeared in the Yamuna on the Chhath festival, the Delhi Jal Board and the Delhi government surrounded by questions. It is said that the dirty water of Uttar Pradesh comes to Delhi through Shahdara drain and Haryana through Najafgarh drain. Okhla barrage water becomes highly polluted due to the dirty water of both the states.

The Delhi government has already made many claims regarding the cleanliness of Yamuna. Delhi Jal Board is treating waste water through its state-of-the-art sewage treatment plants. Apart from this, Yamuna is continuously working on releasing the treated water in the river.

The Yamuna Monitoring Committee (YMC), appointed by the NGT on behalf of the Delhi Jal Board, has already been apprised about the generation of surfactants such as phosphate by hyacinth in large numbers in the Okhla barrage built by the UP Irrigation Department. Apart from this, the YMC has also been informed about the release of about 150 MGD of sewage into the Yamuna by Uttar Pradesh and Haryana.