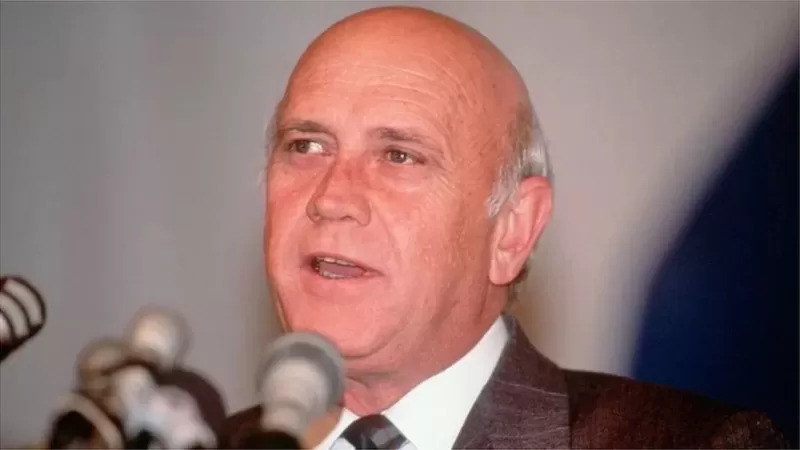 A country that destroyed its own nuclear weapons

On March 24, 1993, South African President Frederick William de Klerk confirmed what had been rumored for many years.

He told the world that his country was working on a secret project and had acquired nuclear weapons. In a speech given in Parliament, the President told the country and the world that South Africa has made six atomic bombs. He also assured that these bombs have been destroyed and that the country’s nuclear program has been completely stopped for military needs. South Africa became part of the NPT (Nuclear Non-Proliferation Treaty) of the United Nations in July 1991.

He said the agency could visit all nuclear sites in South Africa to verify their claims. With this announcement, de Klerk included South Africa in a small group of countries that developed nuclear weapons. Also, South Africa became the only country to completely give up nuclear weapons before becoming part of the NPT. In the 1990s, Ukraine also agreed to destroy its nuclear weapons. But these weapons were inherited by him from the former Soviet Union.

But the question is, how did South Africa make atomic bombs and why did it decide to destroy them?

South Africa established the Atomic Energy Board by making a law in 1948. Its purpose was to explore possibilities in nuclear energy. In the early 1960s, South Africa began research and development activities, and the Pelindaba nuclear plant was established about forty kilometers from the capital, Pretoria. In this early phase of the nuclear program the objective was peaceful. South Africa also has reserves of uranium. Work was also started on finding ways to enrich this important substance.

Uranium enrichment technology plays an important role in developing nuclear weapons. Encouraged by the initial success in the 1960s, the government set up a pilot plant to operate on an industrial scale. In 1970, the then Prime Minister BJ Vorster informed Parliament about these plans and said that the country’s nuclear program was for peaceful purposes. South Africa had rich reserves of uranium and was understanding that economic benefits could be taken from enriched uranium in the future. Along with this, the country also started exploring the possibilities of developing nuclear explosives for civilian purposes.

In 1974, when a report said that success could be achieved in making weapons, the government approved this secret project. However, these initiatives soon turned into the development of nuclear weapons for military purposes. but why?

Portugal left its colonies in Africa. Mozambique and Angola became independent. The civil wars that broke out here took an international shape. The shadow of the Cold War was hovering between the Left and the capitalist forces. The regional security situation had become unstable.

The number of Cuban forces in Angola was increasing. South Africa felt it needed a protective weapon. The country was isolated at the international level as well.

The president told parliament that his country could not depend on foreign aid in the event of an attack.

South Africa was also isolated internationally because of its apartheid policy and was being banned from buying arms.

The US blocked the exchange of nuclear weapons information with South Africa. In 1978, the US passed a law under which nuclear technology could not be given to countries that were not part of the NPT (Non-Proliferation Treaty).

During the Cold War, the world was divided in two, and South Africa was not supported by either of the two superpowers of that era, the US and Russia.

In 1977, when South Africa was preparing for an underground nuclear test, the US and the Soviet Union together stopped it.

In these circumstances, the South African government reached the decision that it should make an atomic bomb for its own security, and in April 1978, the South African government approved a three-stage nuclear deterrence strategy. The first of these was to keep uncertainty about the country’s nuclear capabilities, that is, it should neither be accepted nor denied. The second phase was to be implemented when there was a threat to South Africa. In these circumstances, it was decided that a superpower like America would be told privately that South Africa had nuclear weapons. This could have helped internationally to end the threat. If this threat was not to end, it was decided that South Africa would publicly admit that it had nuclear weapons. At the same time, it was also decided that the bomb would be tested underground. However, it was decided that South Africa would not use the bomb aggressively as it could cause a large-scale international reaction. To implement this strategy, South Africa had to make at least seven atomic bombs. The first was made in 1982. But the seventh was never built. In reality, this strategy of South Africa did not progress beyond the first phase. It is estimated that these bombs had the same capability as the bombs dropped by the US on Hiroshima and Nagasaki in Japan and were to be launched from aircraft. Waldo Stump, a former director of South Africa’s Atomic Energy Corporation, wrote in a 1995 report that South Africa had never tested them, but there is no reason to believe they do not work.

But why did South Africa decide to destroy its atomic bombs?

According to President de Klerk, the reasons for this were hidden in the international political situation of the 1980s. In his speech in parliament, he mentioned the ceasefire in Angola, the withdrawal of 50,000 Cuban soldiers from Angola and the three-party agreement for the independence of Namibia. Apart from this, he also mentioned the fall of the Berlin Wall, the end of the Cold War and the break-up of the Soviet Bloc. The President said that under these circumstances, nuclear deterrence had not only become necessary, but in fact it had become a barrier to South Africa’s international relations. In 2017, the former South African president gave his reasons for opposing the atomic bomb in an interview with The Atlantic magazine.

He said, “I realized that there was no reason to use such a bomb in a war that was to be fought in rural areas. It was painful to think that we could destroy an entire city in a few hours.” I can do it. My personal opinion from the very beginning was that I was looking at the bomb like a noose around my neck.”

“You had something that you had no intention of using, in fact that was barbaric to use, that could not be morally defended.”

In such a situation, when de Klerk came to power in 1989, he started putting an end to the nuclear program. This also included destroying the bombs made. Nuclear plants were to be shut down. High quality uranium enrichment was done in these plants. It was brought to such a level that bombs could not be made from it. Simultaneously, the government started the process of becoming a part of the NPT. Internal political reforms also started in the country and apartheid was abolished.

What lesson did you learn?

In his speech in Parliament, de Klerk said that South Africa’s decision would make other countries ready to give up nuclear weapons.

In an interview with The Atlantic, he also mentioned North Korea.

He said the international community insisted on sanctions in efforts to stop North Korea from making bombs and instead insisted on incentives.

In his 1995 report Waldo Stump, former director of the Atomic Energy Corporation of South Africa, cited practical lessons to be learned from the South African experience.

Nuclear expert Waldo Stump warned the world that neither technology nor the fear of paying a price could prevent a country from moving forward on a nuclear program.

He had said that even though the technology of uranium enrichment and the technology of making highly advanced bombs are very high level, but an advanced industrial country can achieve it. As far as investment in this is concerned, South Africa had to spend 200 million dollars on its nuclear program within ten years.

Stump writes that in 1978 the US banned the fuel needed to run South Africa’s nuclear reactors and also imposed economic sanctions on the country. But whatever effect America had on South Africa, it also ended.

Stuff said, “This meant that pressure from a superpower outside the region only worked to a certain extent on a country developing a nuclear weapon. In the end, for full nuclear non-proliferation, regional tensions must be reduced.”

“This is what happened in South Africa, and the same thing should happen in the Middle East or South Asia or the Korean Peninsula,” he says.

In the end, Stuff wrote that the nuclear non-proliferation goal set under the NPT cannot be achieved by strategic or technical decisions, for this the political will of the country’s leaders is necessary.

However, there are lessons to be learned from this, which can be applied to a nuclear power like North Korea or Iran (which is said to have a bomb).

But the truth is that South Africa is different and has a different place in the history of nuclear weapons.