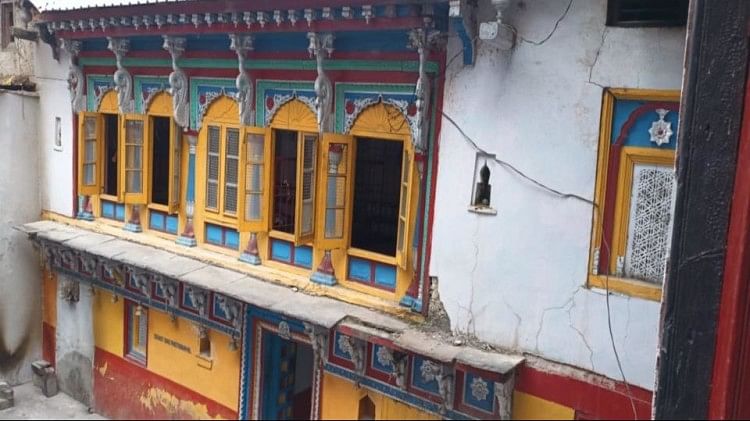 Cracks are increasing in the seat of Adiguru Shankaracharya and the monastery located in the Joshimath Narasimha temple complex. Also, a part of the Narasimha temple complex sinking. But BKTC says that all religious heritage is completely safe. There is no question of danger. Experts will soon conduct a survey of this entire area, for which correspondence is being made with the government.

Here regular worship and Yagya-Havan are performed by the committee. But this religious area is also under the grip of landslides, due to which cracks are appearing on the outer and inner walls of the seat.

The size of many cracks is increasing rapidly. Simultaneously, a landslide is taking place in a part of the Narasimha temple complex. Many questions are being raised regarding the security of these religious places. In the past, Chief Minister Pushkar Singh Dhami had also taken stock of the Adiguru Shankaracharya Gaddisthal and Narsingh Temple complex during the on-site inspection of Joshimath.

He had said that proper arrangements would be made for the protection of this religious heritage. But till now no security arrangements are visible here. Ajendra Ajay, chairman of the temple committee, says that the cracks are not new. Also, the committee is monitoring the whole situation. There is nothing to worry about at any level.

At the same time, the treasure of Lord Badrinath present in Narasimha temple will not be shifted elsewhere. The temple and other assets are still completely safe. Shri Badrinath-Kedarnath Temple Committee says that they are keeping a close watch on the situation. BKTC chairman Ajendra Ajay said the situation in crack-hit Joshimath is critical but the Narasimha temple is safe.