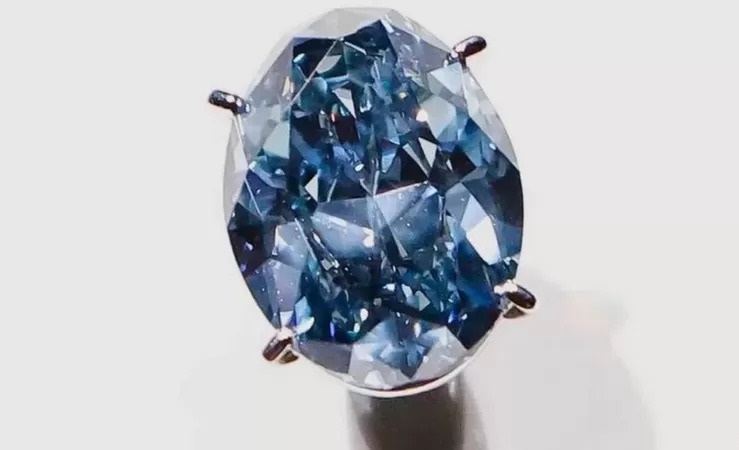 Making of Diamonds and the Secrets Blue Diamond

Diamonds were made in this world billions of years ago. Today our eyes have been dazzled by the brilliance of some of these diamonds.

These are known as promises of eternal love. They are seen as a symbol of prosperity and luxury.

In ancient times, they were considered to be soothing. It is said that their use gives strength. It protects from enemies, evils and nightmares.

Diamonds in India have been mentioned in the Vedas. They have also been a favorite of Hindu gods and goddesses.

According to the ‘Diamond Sutra’ associated with Buddhism of 868 AD, a diamond is such an object through which you can penetrate the worldly illusion and shed light on real and eternal things.

But it is perhaps best explained in ancient Greece. The Greeks called them the tears of God or considered them a piece of stars that fell from the sky.

The most wonderful thing about diamonds is that its truthfulness is extraordinary. The beliefs related to this are also unique.

Why is diamond called ‘fantasy’?

The element from which diamonds are made is also the basis of life and this element is carbon.

Diamonds are exceptionally hard. They have the ability to withstand heavy pressure in the conditions in which they are born. Even then, if there is a right combination of hydrogen and temperature, then it can also fly away as carbon dioxide.

Diamonds are exceptionally bright and shiny. But it is also very tough. They are the best conductors of heat. Their size changes very little due to temperature. It is also inactive towards alkaline and acidic chemicals. Due to the deep ultraviolet rays, it becomes transparent. It is one of the few known objects that has a negative electronegativity.

Diamonds come to the surface of the earth in a very explosive way. These diamonds are the result of the biggest explosions that have happened inside the earth in history. Some of the volcanoes created due to these eruptions have their roots very deep in the earth.

Not all diamonds are transparent. Some are light yellow and some are brown.

But once diamonds are formed, their crystal-like structure has the ability to hold any metal and keep it safe. For scientists, it gives a glimpse of the mineral found in the thickest surface of the earth. At the same time, it also tells what is the condition in the depth of miles under the earth. Blue diamond or blue diamond is very extraordinary in this sense.

No match for purity

Most of the diamonds in our world are formed at a depth of 150 kilometers below the earth.

Blue diamonds are born in the lowest mantle of the earth up to four times as deep.

This was revealed by a study that came out in 2018.

Geologist Evan Smith of the Gemological Institute of America says that gems like diamonds are very expensive, so they are difficult to get for the purpose of scientific research. Smith is the top author of this study.

Diamonds are not only valuable but are also very good in terms of purity. There is no chance of getting anything else in them. Except diamond, no other metal or any mineral similar to it formed at the time of its manufacture can be found in it.

This imperfection of diamond proves to be helpful in giving more information to scientists about it.

Although scientists have succeeded in analyzing 46 such blue diamonds, in which some things were attached. They believe that they must have been born in the earth at a depth of 410 to 660 kilometers.

Some of these diamonds have been cleared from samples, they have been made at a depth of more than 660 km. That is, they are born in the lowest cover of the earth.

In this way, these diamonds have proved to be real time capsules. That is, they get that information, which is almost impossible to find.

George Hurlow, curator and geologist of the American Museum of History’s Gem and Mineral Form, told BBC Reel Natural, “We can’t go deep into the interior of the Earth.” Whereas diamonds are manufactured there. It usually covers whatever is there.

He says, in a way, these are like exploration missions in space. Eventually some diamonds are found on the surface of the earth, and we get a chance to study about them.

Blue Diamond has long remained a mystery of history. It is not yet known why diamonds have such wonderful colors.

In the end, it was found that it contains the remains of boron. It is a metalloid chemical, which has the ability to penetrate the crystal lattice present in it during the growth of the diamond.

But after the veil was lifted from this mystery, a riddle came to the fore-

When diamonds were formed in the lower mantle of the earth, where boron was present on its layers, then where did they get this boron.

The answer to this geochemical puzzle also gives us clues about the depth of the earth.

This concept was introduced by the research group working under the leadership of Smith. It says that boron went from the surface of the ocean to the deep layer of the earth. This phenomenon occurred when its tectonic plates were sliding inside each other. This process is called subduction

The diamond expands to the deep ocean floor by absorbing water-filled minerals. It even reaches the crust of the oceanic plate.

The detection of boron remains found in diamonds born so far from Earth’s surface suggests that water-laden minerals travel deeper into the Earth’s deeper layers than previously estimated. This suggests the possibility of a different water cycle at much greater depths.

Hurlow says that blue diamonds or blue colored diamonds are not only beautiful and rare but they are also very interesting. They teach us a lot about our earth.