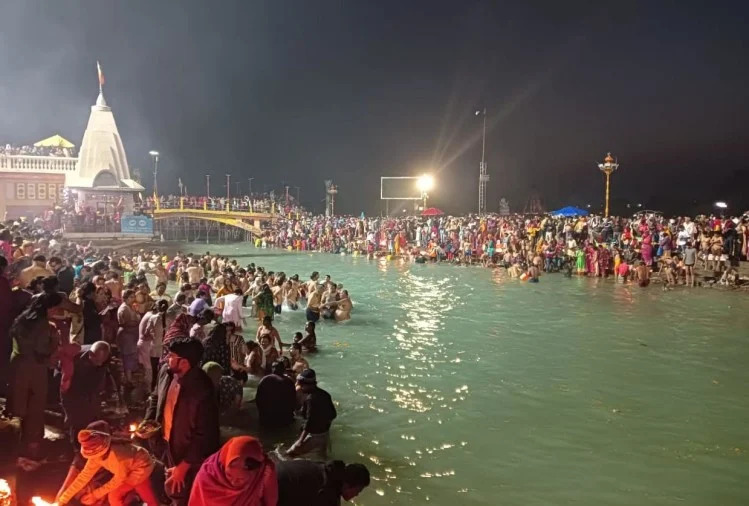 A large number of travelers have reached Haridwar in the holy city of Haridwar on the Ganga bath of Kartik Purnima being held on Friday. The round of holy bathing is going on here since early morning. In this sequence, the period of bathing is going on in the rivers present in Rishikesh and other areas of the state since early morning. In Haridwar, the police administration has chalked out its arrangements regarding the crowd and security of the devotees.

For the first time since the Corona period, no restrictions have been imposed for any bath. That is why a large number of devotees from outside states have reached Haridwar on Kartik bath. The fair area is divided into 9 zones. On the other hand, officers have been deployed by dividing the fair area into 32 sectors. Traffic plan has been made to avoid jam inside the city and on the highway. During this, devotees pray for the peace of their souls by donating lamps after bathing in the Ganges. There was a huge crowd of devotees in the markets of the city. Parking was also full. Mounted police were also deployed to control the crowd. Twelve officers and employees of the local intelligence unit have been appointed to collect important information during the bath. 14 water police personnel and a platoon flood company have been deployed on the Ganga Ghats. A special traffic plan has been prepared for the traffic system, which will be implemented immediately when the time comes. A special team has been appointed in the Mela area to take action against the thieves, thieves and poisoners. Governor Lt Gen Gurmeet Singh (Seni) has extended greetings and best wishes to the people of the state on the occasion of Prakash Parv and Kartik Purnima of Guru Nanak Dev. The Governor said that this Prakash Parv shows us the way to follow the path shown by Guru Nanak Dev Ji and to follow his teachings in life. Said that ropeway is being constructed till Hemkund Sahib. Now Sikh devotees from all over the world will be able to visit Hemkund Sahib conveniently. Chief Minister Pushkar Singh Dhami has extended best wishes to the people of the state on the occasion of Prakashotsav and Kartik Purnima of Guru Nanak. In his message issued on the occasion, the Chief Minister said that the first Guru of Sikhism, Guru Nanak Dev has given us a message to walk on the path of social harmony, peace and harmony.