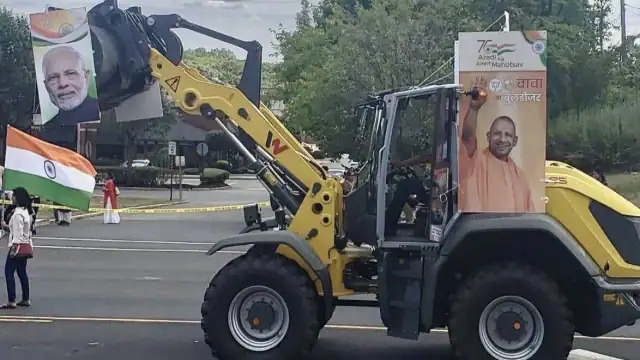 Indians dividing even outside the country

Recently, the dispute between Hindu and Muslim Indians in Britain increased so much that the matter reached to a fight and the police had to take strict steps. The same thing happened in Australia last year during the farmer’s movement.

The polarization in the politics of India has intensified in the last few years. Now its effect is also visible among Indians settled abroad. In many countries including Canada, America, and Australia, there is a division among Indians on the basis of ideology and religion. Recently, when India’s Independence Day was celebrated in New Jersey, USA, a bulldozer also participated in the parade in Edison. In view of the incidents of bulldozers running in many states including UP, it was included as a symbol. During an event in Anaheim, California, some people allegedly came to protest against the repression of Muslims in India, when the two sides started shouting slogans.

Recently, the dispute between Hindu and Muslim Indians in Britain increased so much that the matter reached to a fight and the police had to take strict steps. Last year, during the farmers’ movement, some people demonstrated in support of them in Australia, while some youths came with the tricolor flag to protest against that demonstration and started raising slogans. A similar environment has been seen in Canada as well. There was an incident of attack on the India Day Parade. Apart from this, incidents of attacks on temples have also come to the fore. These are just a few examples that show how India’s political divide is dividing the diaspora as well.

About 30 million Indians living abroad are the largest expatriate community in the world. These include people of all religions and castes. In countries like America and Britain, their numbers are very large and they have lived peacefully for decades. Recent events have raised concerns that the religious and political division of Indian society is making a home in the immigrant community as well. Many experts say that it started in 2014 when the Bharatiya Janata Party won the general elections and formed the government under the leadership of Narendra Modi. Since coming to power, the BJP has been accused of oppressing Muslims and other minority communities.

The growing conflict between Indians in Australia too

Last year, during the Kisan Andolan, some people in Australia organized a rally in his support. After this, some youths reached that rally carrying the Indian flag and started raising slogans of ‘Bharat Mata Ki Jai’ and ‘Modi Zindabad’, after which they were driven away. The dispute escalated to such an extent that a group attacked Sikh youths. The police arrested one of those youths. A big campaign was launched on social media in favor of the youth which the supporters of the Bharatiya Janata Party joined. Money was also deposited for the legal battle of that young man. The young man was later convicted and sent back to Australia.

There are also allegations of harassment of Hindus

The flip side of this is that some Hindus settled abroad feel oppressed because of their views. Samir Kalra, general manager of the Hindu American Foundation in Washington, says, “Free expression for Hindus is shrinking. If you support such policies of the Government of India, which have nothing to do with religion, you are still called a Hindu nationalist.’Pushpit Prasad, a spokesperson for the Coalition of Hindus North America, says she counsels youths who were abandoned by their friends because they were unwilling to ally with either side in the ongoing war in India.