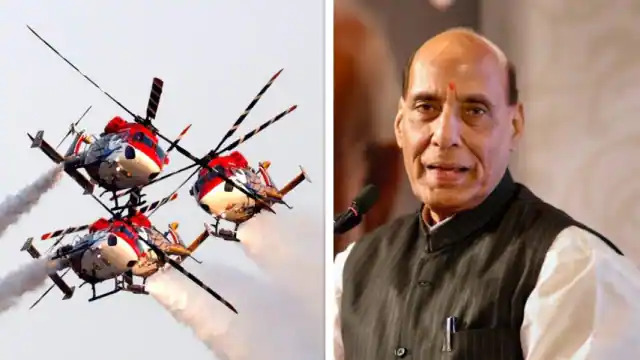 India is preparing to sell arms and drones worth Rs 35,000 crore to many countries of the world including Africa. Defense Minister Rajnath Singh has given this information on the sidelines of the Defense Exhibition.

India has made great leaps in the defense sector in the last few years and now it is set to increase further in the coming years. India is preparing to sell arms and drones worth Rs 35,000 crore to many countries of the world including Africa. Apart from the Defense Exhibition, Defense Minister Rajnath Singh has given information about these preparations. In this exhibition, India will show the world the power of indigenously made weapons, and its research on emerging technologies and equipment like swarm drones. Apart from this, India has also achieved great success in the matter of Artificial Intelligence. Now India is trying to export these weapons and technologies to the countries of the Indian Ocean and African countries.

In this episode, India is preparing to increase this export to Rs 35,000 crore by 2025. Rajnath Singh, who is interacting with his counterparts from African countries, said that our target is to achieve this big figure by 2025. Last year too, India exported defense goods worth Rs 13,000 crore. Defense Secretary Ajay Kumar said that a total of 451 agreements are going to be signed in this year’s expo. These include the launch of products and technology transfer. Ahead of the expo that began on Tuesday, Rajnath Singh said India has managed to be among the top 25 exporters, overtaking the world’s largest arms importer.

This time only Indian companies will have an exhibition

Rajnath Singh said that if the private and government sectors work together, then our exports will increase more rapidly in the coming times. He said that we are rapidly growing as a leader in the design, and manufacturing. We are now moving towards becoming an exporter instead of being an importer. This time only Indian companies have been allowed to participate in the expo. However, foreign companies have been invited to seminars and meetings, etc. Negotiations have been called especially for investment in Indian startups and companies.

1,340 companies involved, 175 countries will be represented

The Defense Ministry says that this expo is the largest, in which 1,340 companies have registered.PM Narendra Modi is also going to reach it on Wednesday and is going to inaugurate the India Pavilion. Apart from weapons, drones and artificial intelligence technology will also be shown in this. Officials say that a total of 75 countries will participate in this expo.