Uttarakhand Weather: 8 Districts On Alert, See Where There Will Be Heavy Rain - The Shivalik
Skip to content 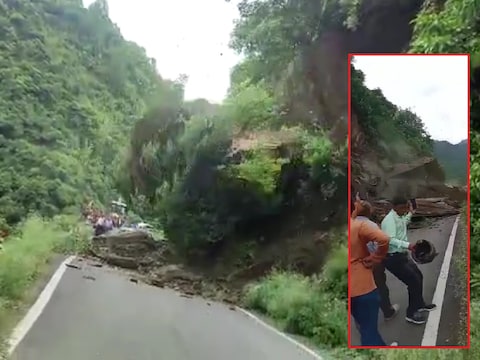 Uttarakhand Weather: 8 districts on alert, see where there will be heavy rain

According to the data of the Public Works Department of Uttarakhand, 193 roads including one National Highway and 14 State Highways are closed due to rain. Here, in some districts including Uttarkashi, and Chamoli, light rain or drizzle is happening at some places since morning and in a short time many districts may also be affected by torrential rains.

Dehradun. Due to landslides caused by heavy rains in Uttarakhand, the disaster continues and in the meantime, the Meteorological Department has issued an alert for heavy rain in 8 districts today, July 29. The rain is expected to start in these districts only after 9 am today. In the midst of this alert, shocking pictures are coming out from the mountains. Somewhere people were seen escaping by breaking the mountain and falling on the road, and somewhere the cattle of the cowshed were killed due to falling debris. Here, 193 roads and roads, including the National Highway, have come to a standstill across the state, out of which the Gangotri Highway has been blocked for more than 30 hours, putting passengers in trouble.

Talking about the first rain alert, the Meteorological Department has warned that heavy rain may start in the next few hours in Haridwar, Pauri, Nainital, Almora, Udham Singh Nagar, Champawat, Bageshwar, and Pithoragarh districts. Issuing an advisory, the Meteorological Center has advised travelers to be alert. SDRF and administration teams are on alert in the Chamoli district, although there has been only light rain since Thursday. But before this, more than a dozen motorways have come to a standstill due to two days of rain, and Badrinath National Highway has been restored after several hours.

The Meteorological Department has issued a warning of heavy rain in Chamoli district for the next two days. Earlier on Thursday, there were shocking pictures of a mountain breaking on the road connecting Kumaon near Karnprayag. The road came to a standstill due to heavy boulders falling, and people making videos were also seen running. Due to heavy rains, there have been reports of breaking of mountains at places and roads are cracking or traffic is continuously disrupted.

Gangotri Highway is stalled for 30 hours

In Uttarkashi district, a continuous landslide zone is active on Gangotri highway for the last 30 hours. The process of falling stones from the mountain is going on since the intervening night of Wednesday and Thursday on the highway in a part of about 100 meters near Bandarkot. Some people are traveling risking their lives, so the administration has diverted the route from the Devidhar-Fold-Uttarkashi route. District Magistrate Abhishek Ruhela also inspected the blocked road in Bandarkot on Thursday. Stopped here from the hill for about two hundred meters. The road is closed again since Friday morning after it was opened for some time due to falling stones. Ruhail directed the BRO to put up caution signage boards here.

Along with Gangotri Highway, 14 rural link roads in the Uttarkashi district are also closed. In many districts including Chamoli, and Uttarkashi, dozens of villages have been cut off from connectivity due to the closure of rural roads. Pinswad, the marginal village of Ghansali Vidhan Sabha of Tehri district, has been cut off from its headquarters. Due to heavy rains late on July 12, the Budhakedar-Pinswad road broke at 6 places, causing problems regarding electricity, water, and other facilities. The villagers have to walk about 5 km for other things including ration. The road repair work is also facing problems due to incessant rains here.
(Inputs from Bharti Saklani, Nitin Semwal, Balbir Parmar and Saurabh Singh)