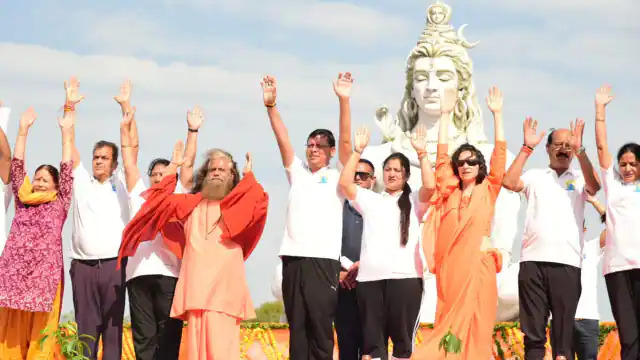 International Yoga Day: From Ganga Ghats of Haridwar to Gangotri-Badrinath Yoga in many cities

On the occasion of International Yoga Day, Yoga programs were organized from Ganga Ghats of Haridwar to Chardham including Badrinath, Gangotri and many cities of Uttarakhand. People enthusiastically participated in the program.

Yoga programs were organized in many cities including Badrinath, Gangotri on the occasion of International Yoga Day. A large number of people, including ministers, performed yoga. It was said that only by yoga one can remain healthy. On the occasion of International Yoga Day, a yoga program was organized by the Department of AYUSH and AYUSH Education at Parmarth Niketan, Rishikesh, in which Chief Minister Pushkar Singh Dhami participated and performed yoga with thousands of people and gave yoga to every citizen of the state as well as the country. To be aware of, to include yoga in the daily routine and gave the message of importance of yoga. During this, Chief Minister Shri Dhami was rewarded with Ganga Award by Parmarth Niketan.

Chief Minister Dhami said that to keep both body and mind healthy, benefits can be obtained by regularly including yogasanas in the routine. He said that Yoga changes the direction and condition of the whole body as well as brings positive changes in life. The practice of yoga connects the body, breath and mind. He said that since time immemorial, sages and sages have adopted yoga, behind their power and success is yoga and meditation.

CM Dhami described the city of Rishikesh as the land of Yoga, Dharma, Culture, Ayush. He said that just as Mother Ganga from Rishikesh does the work of giving life to the whole country, similarly the message of Yoga from Rishikesh goes to the whole world. He said that yoga has now become a global festival. Yoga is not only for any individual, but for the entire humanity. This time the theme of International Yoga Day, Yoga for humanity, also shows the positive signs of yoga for man and humanity.

Chief Minister Pushkar Singh Dhami said that the policy of India has always been to move forward on the basis of truth and justice, he said that our country is a living example of service to humanity. After the Corona period, the work of mega vaccination was carried out in India, as well as the work of distributing the vaccine by India across the world, introducing humanity. India has always given the message of the spirit of Sarve Bhavantu Sukhin, Sarve Santu Niramaya, wishing everyone happiness and well-being.