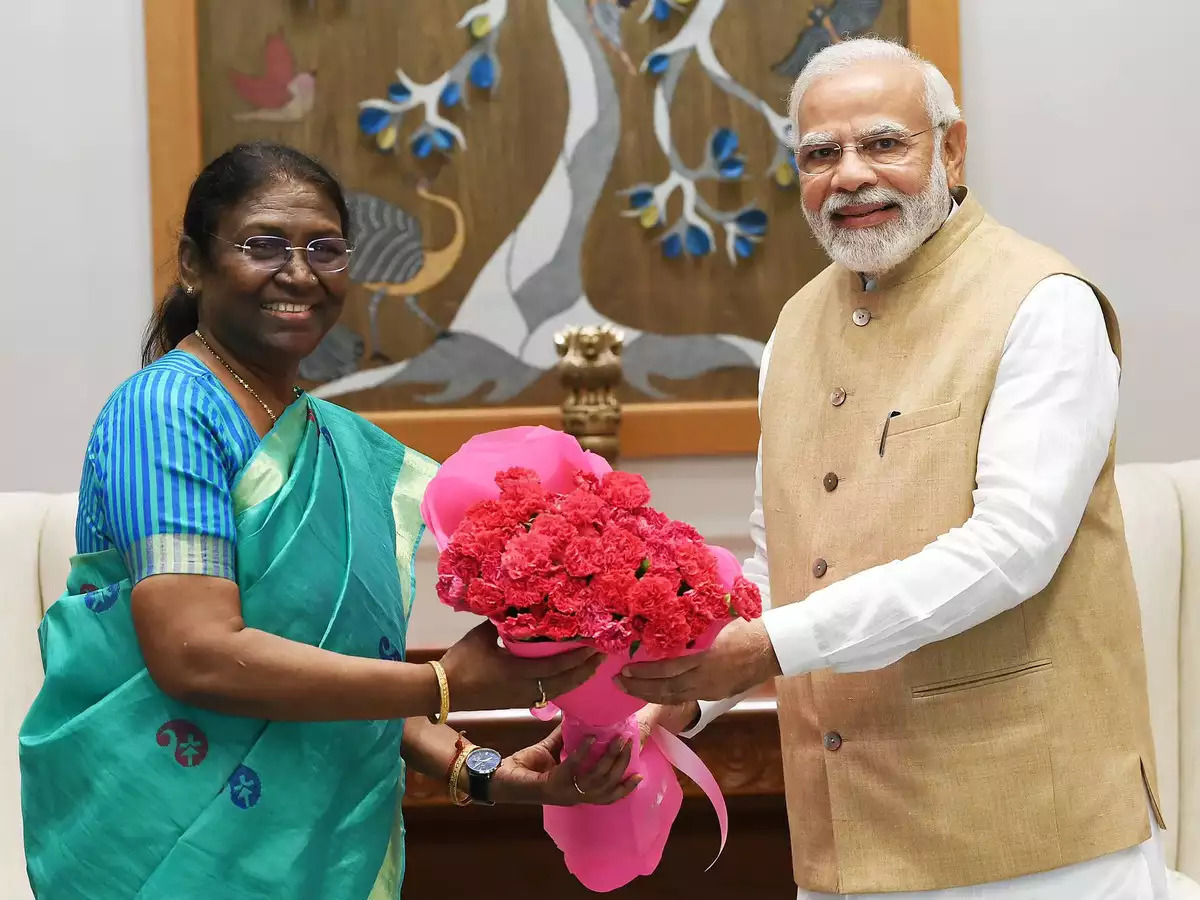 Draupadi Murmu will be the 15th President of the country. She is the first tribal and second woman President of the country to reach this highest constitutional post. In the counting held on Thursday, National Democratic Alliance (NDA) candidate Draupadi defeated United Progressive Alliance (UPA) candidate Yashwant Sinha in the third round of counting. Prime Minister Narendra Modi, Home Minister Amit Shah, and BJP President JP Nadda reached Murmu’s house and congratulated him.

Murmu got the required 5 lakh 43 thousand 261 votes in the third round itself. After the third round, he got 5 lakh 77 thousand 777 votes. Yashwant Sinha got only 2 lakh 61 thousand 62 votes. It includes votes from 20 states, including Rajya Sabha and Lok Sabha MPs.

Murmu got only one vote from Kerala and Sinha did not get a single vote from 3 states.

The counting of votes for the presidential election was completed in four rounds late on Thursday night. A total of 4754 votes were cast. At the time of counting 4701 votes were found valid and 53 invalids. The total quota of votes was 5,28,491. In this, Draupadi Murmu got a total of 2,824 votes. Their value was 6 lakh 76 thousand 803. Murmu got only one from Kerala and a maximum of 287 votes from UP.

At the same time, Yashwant Sinha got a total of 1,877 votes, whose value was 3 lakh 80 thousand 177. Sinha, on the other hand, did not get a single vote from Andhra Pradesh, Nagaland, and Sikkim. He got a maximum of 216 votes from West Bengal. Talking about vote percentage, Draupadi Murmu got 64% and Yashwant Sinha got 36% votes.

Defense Minister Rajnath Singh also extended his best wishes to Murmu. Said- Congratulations to Murm for registering an effective victory in the presidential election. She has been active in public welfare in villages, poor, deprived as well as in slums. Today she rose from among them to the highest constitutional post. This is the strength of Indian democracy.

Yashwant Sinha congratulates Murmu
Opposition candidate Yashwant Sinha said- I congratulate Draupadi Murmu on her victory. The country hopes that as the 15th President of the Republic, she will act as the custodian of the Constitution without fear or favor.

These 10 states include the votes of Arunachal Pradesh, Assam, Bihar, Chhattisgarh, Goa, Gujarat, Haryana, Himachal Pradesh, and Jharkhand, besides Andhra Pradesh. Of these, there are BJP and coalition governments in 7 states. Congress and its allies have governments in Jharkhand and Chhattisgarh. Jaganmohan Reddy is the CM in Andhra Pradesh, who had announced his support for the NDA.

The third round of counting: Murmu got 812 votes and Yashwant Sinha got 521 votes.
In the third round of counting of 10 states, there was a big difference in votes between Murmu and Sinha. There is a total of 1,333 valid votes in these states, whose value is 1 lakh 65 thousand 664. Of these, Murmu got 812 votes and Sinha got 521 votes. These 10 states include the votes of Karnataka, Kerala, Madhya Pradesh, Maharashtra, Manipur, Meghalaya, Mizoram, Nagaland, Odisha, and Punjab.

Victory celebrations across the country including Murmu’s village

After the victory of NDA candidate Draupadi Murmu, there is an atmosphere of celebration in her native village in Odisha and in the rest of the country. People are celebrating the victory with drums and traditional musical instruments. In the Mayurbhanj district of Odisha, his loved ones are celebrating by distributing laddus in Murmu village and in-laws of Rairangpur town.

Swearing-in on 25th, preparations for the celebration in BJP office
President Ram Nath Kovind’s term is ending at midnight on July 24. The new President will be sworn in on 25 July.

Preparations to give a political message from
Murmu’s victory As soon as Draupadi’s victory was announced, celebrations started across the country. With Murmu’s victory, BJP wants to give a special message to the entire country and especially women, including the tribal community, so that a political message goes to this community cut off from the mainstream that the BJP is the only party that is not for power, but for the deprived sections of the country. and works for classes.

This is the reason why party workers have been given strict instructions not to put any other leader’s picture with Draupadi Murmu on the poster after the victory. It is believed that the party has started preparing for the general elections to be held in 2024 since the presidential election.

Therefore, Murmu’s victory was believed to be
certain. On being with 24 opposition parties, 4 lakh 80 thousand 748 i.e. 44% votes were being considered with Sinha. Murmu got a decisive lead in the last 27 days due to the support of many non-NDA parties. In the case of all 10 lakh 86 thousand 431 votes, 5 lakh 40 thousand 65 votes were needed to win. Murmu crossed the required vote in the third round itself.