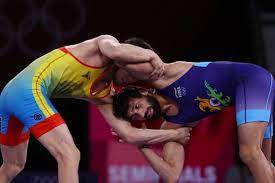 Indian wrestler Ravi Dahiya took home the silver medal after narrowly losing 4:7 in the men’s freestyle 57kg final to ROC’s Zavur Uguev on Thursday. Ravi Dahiya was trailing 2-4 after first period in the gold medal bout. Uguev then increased his lead to 7-2 but the Indian wrestler didn’t give in and came roaring back to win two points and reduce the deficit to three points. Dahiya then went for the kill, looking to score more points but his Russian opponent’s defence held firm.